Over the last couple of years, we have noticed an increase in the number of RAID 1 disk sets being brought in for data recovery, and fewer RAID 5. This is to be expected given the capacity of HDDs has grown significantly during this period so having 3 or more drives is just not needed to give a decent sized file server or shared storage space. Unfortunately, some people do think that having a RAID (in particular a RAID 1) is as good as having a well-managed backup. It is not. 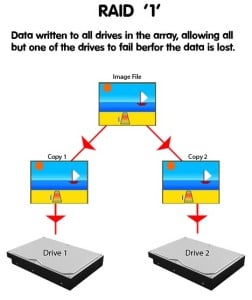 Data spread across two HDDs in a RAID 1

As I type data is currently extracting to our server for an ‘Emergency’ service level job (24 to 48 hours) from a pair of RAID 1 arrays. In this case, one of the HDDs had an intermittent failure (WD5000AAKS Tornado PCB fault for those who are interested). The result of this was that the bad HDD dropped out then in and then out of the RAID array on a reboot of the server. Unfortunately, the RAID controller got a bit confused and started integrating old data into the most up to date disk. Oh dear.  Those familiar with rebuilding RAID arrays know that the number one reason for a non-recovery is a bad rebuild. Once new data has been written on top of the target data there are not many options available other than looking for previous file fragments, shadow copies or the relevant backup files.

In this case, the rebuild wasn’t too bad, and we have been able to fully recover data from both of the failed disks from the RAID 1 and now are piecing together the most coherent data set. Yes it is an exciting weekend activity, but knowing that this database is critical to the running of a large firm of solicitors and on Monday they’ll be twiddling their briefs without it, the fastest service level was requested, which does mean a couple of late nights and early mornings for those trying to recover the data here.

Generally, RAID 1 does provide more reliability than a single HDD. However, if there had only been a single disk with the data on it’s very likely that we would have dealt with the firmware/ROM issue the HDD was suffering from and made a full recovery of the data. In the present state, it is likely there will be some data corruption (albeit a small amount hopefully). Of course, if there had been a single HDD and there had been a head crash then it would not have been possible to recover any data.

What of their server backup do you ask? Well there’s a combination of corrupt BackupExec files and a password and encryption key that the system administrators aren’t sure of (there was a recent change in IT support for the solicitors’ firm.) So the rule is, check on your backup, check that it is ready for that moment of disaster. Whether it be tape, external HDD or cloud-based storage, the backup might not be working quite as you expect at your moment of need.

Cheadle DATA Recovery Ltd
5.0
Based on 237 reviews
See all reviewsWrite a review

James McPhail
14:02 10 Feb 20
John was able to perform a full recovery on all of my data from a 250gb SeaGate hard drive from 2004 after the power input was exceeded by a 20v laptop charger.As a result I was able to maintain... every single file on the hard drive when a number of other data recovery companies said a full recovery was unlikely.I was dealt with promptly, with courtesy and in a very professional manner by John and would HIGHLY recommend his services!Many thanks once again for assisting me in keeping hold of many cherished files from my childhood.Kind regardsJames McPhailread more

Edwina Forrest
11:40 31 Jan 20
After Apple Store managed to delete everything on my computer, they then found that the back up time machine would not restore. Had it not been for Cheadle Data recovery, I would have lost ALL my... files. John Reid was extremely helpful and explained fully the problem and he was able to retrieve all my files from the damaged hard drive, what a relief! I would highly recommend Cheadle Data Recovery and John Reid.read more

Paul Brooks
17:38 25 Jan 20
My company laptop hard drive failed and was in a very very very poor condition and when we came to use our backups we found that these were corrupted too. Despite the condition of the hard drive John... was able to recover all our critical business data from it. As well as being very pleasant to deal with John is incredibly talented when it comes to data recovery; we had our data retrieved and returned to us within three days and the price was reasonable too. John has saved my company days and days of work restoring our database and I cannot thank him enough. I would recommend Cheadle Data Recovery to anyone who finds themselves in a similar situation, many thanks.read more

Dan Hulme
15:44 22 Jan 20
When my HDD wasn’t detected by my laptop I thought that I would be never be able to ever get any of my data back! I was incredibly saddened and frustrated.It wasn’t until my HDD failed that I... realised quite how precious much of the now inaccessible data actually was, I had no other backups, something that I mustn’t overlook again!Initially, I followed the online advice of my HDD device manufacturer and sent my HDD to a company based in Surrey. I was absolutely stunned by the quote I received from this company and the very vague claims that the data “may” be recoverable, with no guarantees.A friend recommended that I obtain a quote from Cheadle Data Recovery (CDR). I asked the company in Surrey to return my HDD back to me. I spoke to John at CDR who explained the data recovery process to me in a very easy to understand manner. John is so polite, knowledgeable and reassuring. It is evident that John knows how emotive the issue of data loss can be and my telephone discussion with him put me at ease with the data recovery process and likely costs.Prior to returning my HDD back to me, the company in Surrey miraculously managed to provide me with a revised quote that was 50% less than their original quote! My trust with this company had gone and without any doubts I knew that CDR were the best option. The company in Surrey did return my HDD, but I expressed to John that I was concerned as to whether they may have sabotaged it. Thankfully, following John’s inspection he assured me that this wasn’t the case.The speed of service from CDR was superb, especially considering the fact that my communications with John fell within the Christmas and New Year closure period (John took the time to respond to my initial email during this time, despite the business being closed).Upon finding the fault with my HDD, John phoned me to explain that it was a faulty read/write head that had caused the data to become inaccessible. I was reassured that the price I was quoted by CDR included the necessary donor parts AND a full file listing detailing the recovered data and any data that was problematic (thankfully, none of the files were problematic). It must be noted that the company in Surrey wanted an additional £148.00 + VAT for a file listing to be included. This shows how incredible the value of CDR’s work truly is.Ultimately, I can’t thank John at CDR enough and I’m incredibly impressed by the level of service offered. I would have no hesitation in using CDR’s services again and I will be recommending CDR to everyone and anyone that requires data recovery.read more

popat kunjar
17:08 21 Jan 20
We had excellent results and were very happy with our data recovery. CDR operates on a no-recovery, no-fee basis and provides a clear price in advance of you sending your failed device.... Communications were very good and the overall service from John was informative and excellent from start to finish.read more

Friday 21st February: Cheadle Data Recovery Ltd shall be closed to phone enquiries from 12 noon onwards due to the requirements of an emergency service level recovery.
Close the Content Dock Do not show again