Quotes over the phone – too good to be true?

It’s natural not to want to pay over the odds for a service so we urge potential customers to consider the following when comparing quotations for data recovery services.

Data recovery can often require extensive amounts of work, particularly for a hard disk drive with a mechanical failure or a solid state disk with a processor chip failure. If you contact CDR – Manchester Data Recovery Services – an up to date price list detailing all of our recovery charges will be sent to you. All quotations include the cost of donor parts, and our non-refundable fee policy is always applied.

Why not visit DataRecoveryReport? It’s website based in the USA which gives advice to those who have suffered data loss and details some tricks and scams used in the data recovery industry.

We realise that if your HDD has just taken a physical shock, which has resulted in a serious mechanical failure, then the last thing you want to hear is that there will be significant financial cost to recover the data. Other data recovery companies realise this too, which is why some will give quotations over the phone, even for the the most serious failures, which are very low and bear no resemblance to the quotation you will receive once they have your disk on their premises. In addition to this, any advertised “no-recovery, no-fee” policy seems not to apply when the company asks for a large (often £200+) non-refundable donor parts fee to attempt the work. Moreover, once the disk is received it allows for it to be opened and to make alternative data recovery attempts more difficult or even impossible.

If in advance of sending in your device to a data recovery company you have been given a quotation of £100 and then receive quotation for £500+ when they have your HDD/SSD then you should request your device back. It is very likely these companies will try to make other additional charges if they start the work. Most reputable data recovery companies will be able to give you a full list of all charges they might make in advance of you sending in your device, including any costs associated with donor parts, return media storage or courier fees.

Below is the unedited review we received on our Google+ Business listing after we recovered the data for a customer who had sent his HDD to two companies before CDR. He was quoted low over the phone by another data recovery company, then sent his disk in. 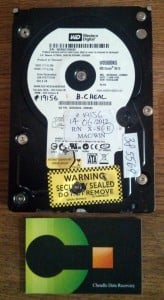 Dr. Bradley Cheal, The University of Liverpool, Department of Physics.: “I have never known a hard drive to fail before, but without warning our portable drive (which we soon realised had the sole copies of irreplaceable photos) suddenly and completely stopped working, and would only make a clicking sound. We began to accept that it would be expensive (it transpired one of the heads had died) but we would first like assurance that the data was recoverable at all. Looking around for the best quote, and a “no recovery, no fee” agreement, seemed simple enough on Google – many companies offer broadly similar quotes, upbeat claims and seemingly genuine customer feedback. I have since learned a lot.

To cut a long story short, I would have saved myself a lot of money and further anxiety about the welfare of my drive’s contents, if I had gone to Cheadle Data Recovery in the first place. One can only hope that there are many companies in the world who are competent, honest and reputable, but many aren’t, and coming high up in a Google search seems to mean nothing. Maybe you think I am not genuine? At the very least, for any company, Google them, and scroll further down the search results.

The first company, we’ll call “F”, called me several times, sounding very jolly and how their machine was reading through the contents of my drive and “sometimes coming across a hard bit which takes time”. I then got a message to say the head stack had failed (completely contradicting the caller – how would they have been reading the drive?) and asking for £200 with no assurances of success (with another £200 request to follow). Only then did I Google them specifically, scrolled down and heard the full story. I immediately paid for my drive back, hoping it was not damaged further or sabotaged.

The second company, we’ll call “D”, seemed OK, but sent me a blunt one line response saying that data recovery is not possible. Whether this was laziness, they thought it wasn’t worth their while, too tricky for them, didn’t have the parts… I don’t know. I could only request the return of the drive and cling to any remaining hope for the data.

I then contacted CDR – I was reassured by a physical address that I could easily visit (although this isn’t essential) and I felt John sounded more calm (less hype), upfront and new his stuff. When I visited he made clear how much it would cost (it’s highly skilled, labour intensive and therefore expensive, but the price was very fair) but only in the event that the data was recoverable. After meeting John it soon became clear that he knew what he was doing, would be able to tell me honestly, once and for all, if the data could be recovered and quote a fixed all-in price that reflects the true cost to undertake the work.
Now I have all of my files, every last one! If only I had just gone to Cheadle Data Recovery to begin with. This would have happened far sooner, with far less stress and much less postage.”

The result on this data recovery job was particularly satisfying for CDR, not only as a result of the review and the previous handling of the HDD, but because the disk in question was a 4-platter, 8-head Western Digital WD5000KS which are very challenging to work on. Note – this testimonial was written a number of years ago, the fees this company requests in non-refundable fees can now be as high as £500.

Cheadle DATA Recovery Ltd
5.0
Based on 299 reviews
See all reviewsWrite a review

steve Minshull
06:16 20 Jul 21
I found Cheadle Data Recovery on a google search after my hard drive stopped working. They took the drive and repaired it and retrieved the data i required.Excellent service and wouldn't hesitate... to recommend them to anyone who has problem with the computer drivesread more

Simon Elric
12:28 16 Jul 21
Great speedy service. They went above and beyond to get our data recovered from a REALLY old Hard Drive.

Phlebas99
08:35 01 Jul 21
Called about MicroSD recovery. The gentleman I spoke to was professional, obviously an expert in recovery, and very upfront and honest about the potential for success and the cost.Based on the chat... I have chosen not to go ahead but am still very happy about the service I received over the phone in helping me make this decision.read more