As the cost per gigabyte decreases they are becoming increasingly popular as storage devices where hard disk drives would be used. The most significant difference between flash NAND technology and hard disk technology is that the former does not have any mechanical components.

Here we have two images of flash-based media with their outer packaging removed: 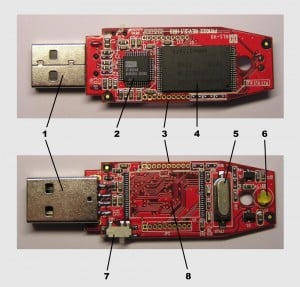 The SSD and memory sticks that CDR – Manchester Data Recovery Services – receives in for recovery usually relate to a failure of the controller chip. This is the component that allows the storage device to interact with the computer and control the way data is distributed through the flash nand chips. The controller converts requests for logical sectors (LBA values) into the physical locations on the actual flash memory chips. It also contains a wear levelling algorithm which extends the working lifetime of the device. 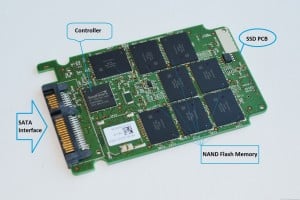 When a controller chip fails one of the most challenging aspects is calculating where data is spread through the flash chip. Data is not recorded in a simple linear fashion. The controller chip is designed to increase the performance which means spreading data through multiple locations to allow, rather than having required data in sequential blocks. As such recovery of data from these devices can be extremely challenging.

Cheadle DATA Recovery Ltd
5.0
Based on 288 reviews
See all reviewsWrite a review

Angel Muzas
19:34 16 Mar 21
I have a device that was encrypted and I ask John for his assistance, unfortunatelly it was impossible to retrieve the data but he was really clear and informative.

Andres Budihardja
10:31 09 Mar 21
i have drive can detect but not spin & incorrect function message after choose initialize disk use MBR in disk management

umakanth panchagnula
14:14 03 Mar 21
I bought a 1TB memory stick on Amazon, following 10GB of data saving it stopped working. I discussed with my colleague in hospital, Parisa, who took the extra effort of finding someone to help. She... consulted a few experts and all of them suggested that I contact John Reid at Cheadle DATA Recovery. John diagnosed the problem. It was a counterfeit device and although it says 1TB it actually was a 16GB memory stick and was a fictitious product. John provided fair, thorough and professional advice and did not take any payment for this consultative service. I have purchased a 1TB disk from John and have been using it with absolutely no problems. I thank John immensely and would highly recommend him. I would also like to thank my colleague, Parisa, for her support in finding John.read more

Eddie Pitman
15:33 02 Mar 21
We suffered a power cut that most probably led to a hard drive failure. This combined with my (admittedly) relaxed attitude to backing things up meant we lost years of data - mostly photos. I was... going to write this off and put it down to experience but was persuaded by my wife to look for someone who could recover the data. To cut a long story short John at Cheadle DATA Recovery was able to recover pretty much all we'd thought was lost. For no fee he analysed the failed drive to give us an idea of what could be recovered and told us the likely cost should we wish to go ahead which we did. We now have years of photos that we'd almost forgotten about to sort out! I would recommend his services to anyone who finds themselves in a similar situation.read more